Here we have yet another anti-Southern article that blames “neo-Confederates” in Congress for obstructing the Left’s social agenda:

“Today, there are quite a few very vocal neo-Confederates who think gun rights, states rights, the protection of white American culture and elimination of “excessive” taxation on the rich are the nation’s preeminent concerns. Their anti-bellum mindset makes it impossible for them to accept scientific reality — climate change, evolution, the true age of the planet — and political reality — America is becoming a more diverse, tolerant nation that does not share their fear-driven philosophy.

One of our two great political parties has been captured by the neo-Confederates and, because so many of them have been elected to Congress, the political system is gridlocked. Big problems are either ignored — climate change, deterioration of infrastructure, the toxic greed in the financial system — or kicked down the road to be fixed another day.

As bad as things are, though, governmental paralysis created by reactionary resistance to change is not unique in our history. For most of the first century of the republic a final resolution to the slavery issue was kicked down the road over and over. Lincoln and the Union army finally forced the necessary realignment. …”

Note: I had forgotten about “climate change,” but I suppose destroying the coal industry and making electricity drastically more expensive for White households is also on the list of things to do in Obama’s second term.

How many Northeastern projects are there in this cartoon? I see debt ceiling, guns, climate change, and Medicare. Surely, you got gay marriage, amnesty for illegal aliens, destroying the white American culture, legalization of pedophilia, and reparations for slavery coming down I-95 South. 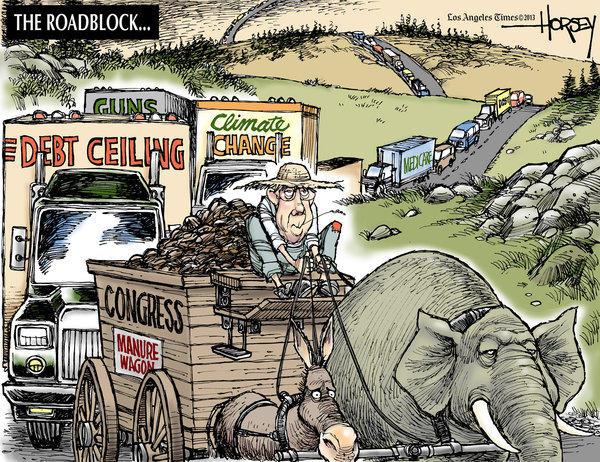