I have a TV but I don’t really use it much because I don’t have a cable package. Maybe I’ll watch a movie, but most of them suck these days so that doesn’t happen often. Why pay for garbage? Avoiding TV really helps to maintain one’s mental health. On the other hand, it really heightens sensitivity when you get inadvertently exposed to this truly dystopian bullshit.

I was at a friend’s place awhile back and (((CNN))) was on. The story about was about a “white supremacist” protest in Texas over the construction of an Islamic structure. I thought to myself: “Great to see people taking a stand, I wonder if we know these guys?” Then of course, the story quickly turned to why this protest was instigated as a result of Russian hacking. No credible evidence whatsoever was offered since none actually exists.

It’s rude to try and change the channel on someone at their own house, so I braced myself for the impending barrage: Annoying Black Lady Selling Insurance – Dick Pills- Class Action Lawsuit – Cancer Treatment Center – Computerized Solider Selling Car Insurance – Soda – Osteoporosis. Sure, there’s lots of propaganda, but the commercials might actually be the most troubling aspect of American television. Here are a few of the varieties that make me cringe the most: 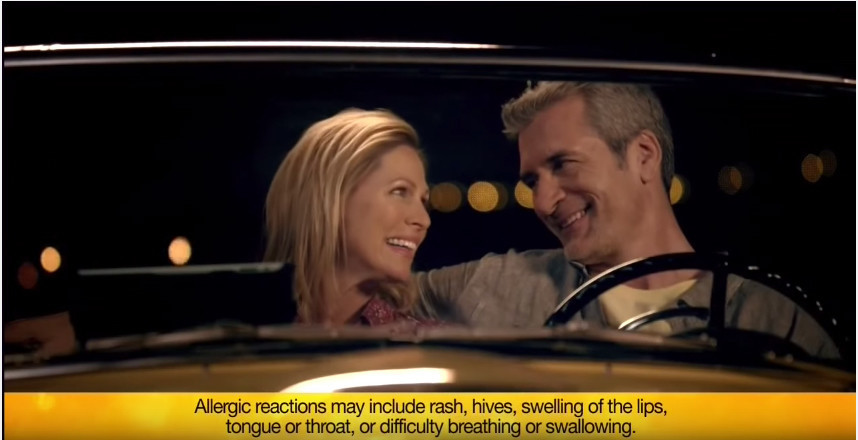 The aspect I find particularly disconcerting about the dick pill ads is that the middle-aged men featured in them are fit, happy, and sporting a full head of hair. If there’s a female, then she’s as slim and attractive as her age would allow. And yet his penis fails to function?! It’s a completely incongruous scenario. At the end of these commercials, viewers are always cautioned to consult their doctor about whether or not they’re “healthy enough for sexual activity”. Why might that be the case?

This brings me to the next class of dystopian commercial. They promote America’s favorite poison, High Fructose Corn Syrup. If you watch a commercial with a wholesome, beautiful young lady strolling through a sunny corn field while she reassures you: “Hey, don’t worry, there’s nothing bad about this stuff”, shouldn’t that get some gears moving in your head? Apparently, this only happens if you’re a paranoid conspiracy theorist. I’m dismayed to observe that there’s huge chunk of the population that seems content to guzzle this death-syrup and waddle around until the day they must ride their fat scooter over to a dialysis center.

Embracing the unhealthy lifestyle imparted to you through these commercials will inevitably require extensive medical treatment. This could accidently result in all sorts of additional maladies. Don’t worry though, there’s always some helpful lawyer filing a class action lawsuit on your behalf. I saw one last year literally asking viewers if they’d experienced “fatal bleeding” from some sort of mesh implant. Advertisers now seem confident that they have the power to reach people beyond the grave. Maybe they’re trying to prompt bereaved family members to hold a séance for an answer. I really don’t know. America is so fucked-up these days that it’s tough to draw any conclusions.

Did you actually survive medical malfeasance? You gettin’ payed! There’s just one problem. You’ll probably be receiving what’s known as a “structured settlement”. That means you can’t get a big ole’ stack ah chedda all at once. Instead you’ll receive a series of payments, which takes a while. Waiting is not an amenable process for people who have a high-time preference. Thus, beneficent enterprises like J.G. Wentworth will gladly give them a small stack of cash upfront in exchange for signing over their settlements. It makes little pretense about the target demographic, but does make a mild attempt at subterfuge. I checked out their website and it features a healthy-looking black family laughing on a beach. The ocean doesn’t pay out cash settlements for drowning. If they were honest, then they’d show footage of an obese sheboon getting struck by a car while jaywalking. At least this company has some meager sense of shame.

The principal goal of car insurance commercials seems not to be selling insurance policies, but driving viewers insane through a constant campaign of harassment. Perhaps that’s why they seem to play with the most alarming frequency and feature tropes designed for maximum annoyance. Maybe if everyone is driving around in a heightened state of frustration, they’ll cause more accidents and thus raise premiums. This psychological warfare has me longing for the good old days when I’d flip on the TV and watch Dan Marino try to convince me to take out a second mortgage on my house.

Recently, I can’t figure out whether or not the point of many commercials is to sell a product or promote racial miscegenation. What’s even worse than the ads themselves is observing people just absorb it all like everything is normal. How many red flags does it take for someone to notice that things are not going fine around here? I for one have seen enough for one lifetime. That’s why I’m never getting cable again.

-By Tommy Shackleford and originally published at Identity Dixie.